And today I saw my first Monarch of the year. So ready for the 2019 season!

Today my neighborhood BBF (Best Butterfly Friend), otherwise known as the magnificent S, spotted the first Monarch of the season!

Spring Update from Professor Chip Taylor (University of Kansas), founder and director of Monarch Watch, the preeminent authority on Monarch migration in the US. What follows below was taken from the Monarch Watch newsletter. You can subscribe to the newsletter here:  https://monarchwatch.org/subscribe

To understand the monarch annual cycle, I break down the year into 6 stages: 1) overwintering (late Oct–early April; 2) return migration through Mexico (late Feb–April); 3) breeding in the US in March and April; 4) recolonization of the regions north of 37N (May–early June); 5) summer breeding north of 37N (June–August) and 6) fall migration (August–Oct). Based on first sightings, temperatures, probable egg distributions, generation length and early May conditions, my current prediction is that the overwintering population will be in the range of 4–5 hectares. At this writing, I see the population as trending toward 4 hectares. However, higher than average temperatures for May and June–August in the Upper Midwest could result in a population that is closer to 5 hectares.

The positive conditions in Stage 3 this year include the highest number of first sighting recorded in the central flyway since Journey North has been recording these data. That seems to tell us that the relatively large population of 2018–2019 wintered well, in spite of reports that the butterflies were abnormally active during the winter, and navigated from the colony sites back to Texas without experiencing high mortality. Temperatures in Texas were lower than in 2018 which had the effect of again confining most of the egg laying by returning monarchs to Texas but also increased exposure to predators and parasites and increased generation length. Overall, the first generation produced in Texas and southern Oklahoma could be larger than in 2018 due to the larger number of returning monarchs. While that could be true, the predators and parasites could be more abundant this year. Unfortunately, we have no measures of the year to year variation in egg and larval mortality resulting from these causes. Due to the lower temperatures, the average date of departure from Texas and Oklahoma for first generation monarchs should be a bit later this year. That may not be a bad thing since the forecasts indicate that conditions for recolonizing the northern breeding areas won’t be favorable until the second half of May.

The bottom line is that we can expect monarchs to have another good year, not as good as 2018, but a good year – assuming near average temperatures of Stages 4 (May–early June) and 5 (summer).

On May 1st at my Evanston IL home, the Milkweed season had begun! Here are the pics I took that day: 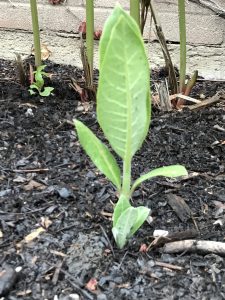 Well-established Milkweed with a Southwestern exposure: 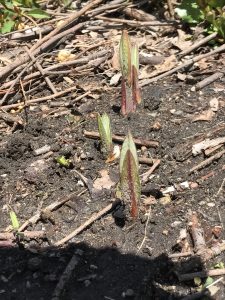 Well-established Milkweed with a Western exposure. Plants usually come up near the previous year’s growth. Here you can see remnants of last year’s stalk: 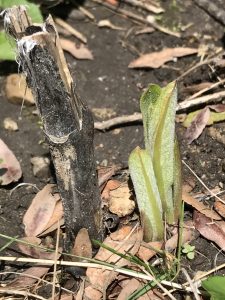 Milkweed sprout from a seed planted last fall and overwintered outdoors in a clay pot. I find the Milkweed seeds do best directly in the ground, but I try to have some in pots to give away to Monarch-raising newbies. 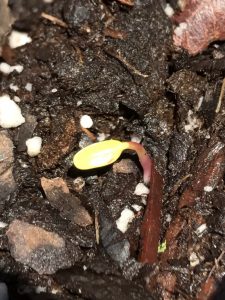