If I’ve gathered eggs immediately after a butterfly has laid them, I will have about four days before I have a caterpillar. However, I’ve been fooled before. It’s easy to confuse an egg that has actually been outside for a few days with one that is fresh laid. It’s best to prepare your egg for hatching as soon as you bring it in.

When I bring in an egg, I immediately trim down the milkweed leaf on which I found it. The egg probably won’t hatch any time soon and in the meantime the leaf will dry and curl.

If there is too much curled up leaf it can be hard to spot the egg to see if it has hatched.

I then put each egg into its own container. I use “bug jars” I buy in bulk from Oriental Trading or Amazon, and tuck a piece of cut up pantyhose (rummage sales are a great place to get piles of pantyhose for pennies) between the lid and the jar. 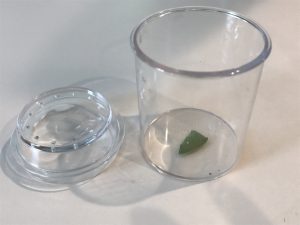 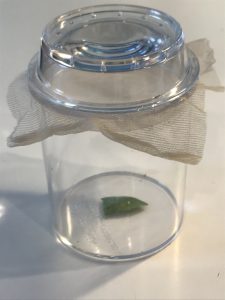 Any jar will work if you put a piece of nylon over the top and rubber band it down. I don’t recommend mesh unless it is VERY fine. Newborn caterpillars are incredibly tiny Houdinis. See the tiny air holes on the lid of the jar above? You’d think there were caterpillar exit signs posted on those things given how quickly the newborns will run right off the lovely piece of nice fresh milkweed I’ve just given them and make good their escape to explore my living room!

By the day after I’ve brought in an egg, the leaf it is on is no longer fresh enough to feed the baby caterpillar if it hatches. It is hard to watch the eggs throughout the day to be sure they don’t hatch without my noticing and newborns starve to death quickly. So the second day I set the leaf with the egg on top of another, fresh, damp piece of milkweed. I center it so that whichever way the newborn goes, it finds fresh leaf. I do this daily until the egg hatches.

The fresh piece of leaf I give my caterpillars is damp for two reasons. One, I’ve washed the milkweed leaf to remove toxins and tachinid fly eggs. Two, I don’t want my caterpillar to dehydrate. I don’t want to drown it either, though, so the leaf is just damp, not puddled. 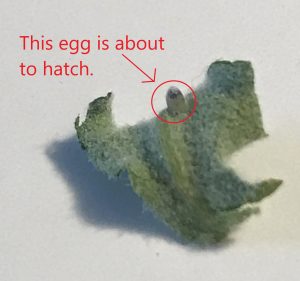 The egg in this picture is about to hatch. In a couple of hours there will be a tiny caterpillar and no sign of the egg. The top of the egg appears to be black- that is the caterpillar’s head as it eats its way out of the top of the egg shell. Once out it will devour the rest of the shell.

Newborn caterpillars are easy to care for. Just don’t try to pry them off their current milkweed leaf! Each day take them out of their container (while still on their leaf). Keep an eye on them and dump the frass (that’s a fancy word for caterpillar poop) out of the container. Put a new clean damp leaf into the empty container, then set their current leaf on top of the new leaf.  Done.

Do be aware that if you panic them, they will curl up in a ball and leap off the leaf to save themselves from you, at this age often hanging from a silk string, like a spider web. If you were a bird planning to eat them, this would be a great trick.

Pro tip: these guys are tiny.

Make sure you know where they are when you’re moving things in their container or you may toss them out with the frass and old leaf.

The caterpillars start developing rapidly. When they first hatch they have no visible stripes, but by the next day the stripes are already visible:

As the caterpillars grow, they go through five instars. An instar is the time between an insects molting, or shedding. Yes, they shed. They’re born, then they grow until their skin is too tight. At that point they sit still for a while, hours or even a whole day (Newbie caterpillar keepers sometimes freak out and nudge them about during this time. Don’t do this. Leave them be, they’ll be fine. Promise.) before they quickly squirm out of their skins and then eat the shedded muck. Mmmmm. It’s quick and I rarely catch them in the act. I just notice, wow, they’re perky and hungry and their skin has gotten super loose!

Below is a five day old caterpillar. Compare it to the newborn pics above to see how much it has grown in just five days.

In this pic from the next day, you can see the shed behind the freshly molted caterpillar and the head cap which has fallen off and landed on the leaf beneath:

Below is the same caterpillar later that day, perky and baggy. At six days old he’s already been through a couple of instars. (No, I don’t know if it’s a boy or a girl. You can’t tell until they go into a chrysalis, and you can’t tell easily until they’re butterflies.)

When caterpillars get to be 7 or 8 days old, it is about time to transfer them to a larger container. The small container gets cramped between the caterpillar, the amount of milkweed they are eating, and the frass. Caterpillars make So. Much. Poop.

I move my caterpillars into the Kritter Keeper brand of large plastic critter containers- you’ll see them in all the photos. I don’t actually recommend them, though. If I had known what I was doing 17 years ago, I would have only bought mesh habitats as they have the tremendous advantage of being a fine place for your butterfly to hang out after it emerges.

Theoretically, you could even put tiny caterpillars in the mesh cage, but I think they would be difficult to keep track of.

This is probably a good place to talk about how many caterpillars to keep in each container. I give each caterpillar their own habitat. This way if one gets ill it doesn’t infect the others. Also, they are not all going to be ready for release at the same time. It is much easier to release a butterfly when you don’t have to worry about disturbing other caterpillars in potentially sensitive stages, such as when they are preparing to go into their chrysalis. That said, I know plenty of people who put them in together and make it work. The only thing that is sure to end in disaster is putting tiny caterpillars in with large caterpillars. The large, mindlessly munching caterpillars will eat the smaller ones without even noticing.

Newbie caterpillars keepers worry about their babies. A lot. I know, I’m the one who gets the calls. One thing you never need to worry about is folded over antennae. It can look worrisome, but it is no problem. As the caterpillars get bigger, their antennae get very long. When they molt, their new antennae come out of the old skin in a crumpled up position. This usually sorts itself out quickly. However, even if it doesn’t, don’t worry. After the next molt, or after they emerge from their chrysalis, the problem will have resolved itself.

…and by the next day they are fully extended.

Oh, and remember those babies who would fling themselves off a leaf to escape predators? The big guys do the same thing. They let go of their leaf, curl up, and wait to fall into what they expect to be brush beneath their milkweed plant:

Once again, nothing to worry about, just a healthy defense mechanism. The big guys don’t hang from silk thread though- no need. They have no problem walking a long way, even up to ten feet, to get to their old milkweed plant or to relocate to a new one. As long as the leaf is good, though, they’ll stay where they are, so no need to worry that their space is limited. Just keep those leaves fresh and they’ll be content to stay put!