I didn’t start out with healthy habits. A good midwestern girl, I had meat and potatoes at every meal, most of it cooked in the bacon grease that sat in an old tin can on a corner of the stove. Vegetables were a spoonful of warmed canned peas or green beans, which almost no one actually ate. Can you blame us?

Eventually in my late twenties it occurred to me that maybe this wasn’t the best way to go on. I know, I’m quick.  It has been a slow evolution, but these days my family and I cook and eat healthy food. 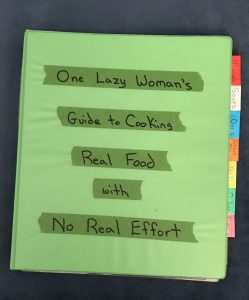 If you’re looking for some recipes that won’t clog your arteries but also aren’t so complicated that the heart attack sounds like a better option than cooking, click on the pic of my recipe binder.

Many, but not all, recipes are gluten and meat free. Most can be adjusted to accommodate different diets. Bon Appetit!